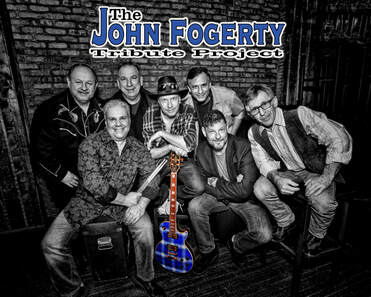 A new and improved version of "Willy & The Poor Boys," a Creedence Clearwater Revival/John Fogerty tribute band founded by Tony Polimeni in Long Island, New York in 2013, has hit the tribute band circuit. Re-invented and re-formulated they are a high energy act called "The John Fogerty Tribute Project." The new lineup features seven veteran Long Island musicians assembled to give you the truest, most authentic John Fogerty Rock & Roll tribute experience available outside of seeing John Fogerty himself. The new formation has enabled the band to meticulously recreate the equipment, instrumentation and musical arrangements and meld this into a professional concert style performance.

The John Fogerty Tribute Project is not a cookie cutter tribute act giving you the same songs and robot style performances. Rather, their live, interactive, heart throbbing performances are at the core of a real live John Fogerty concert. An energetic tribute that will bring the house down with all the songs you would expect to hear from both John Fogerty's Creedence Clearwater Revival years and his solo career. A fitting tribute to the man and his music while maintaining the individual musicianship of each band member and their talent. Via their media outlets, you can follow the developments, hard work and "fan-extras" no other tribute band provides. Their original Facebook page has over 2500 followers and the new band seems to be picking up speed of about 400 followers a month nationwide, with an overwhelming number of likes and positive feedback.

The band is also in contact with current members of John Fogerty's touring band while seeking their advice and critique on the project. The John Fogerty Project leaves their audiences with a memorable uplifting rock and roll experience while paying tribute to this classic and timeless music everyone knows and loves leaving the fans wanting to do it all again. This tribute band is an absolute must see. A truly unique experience on the tribute band scene.